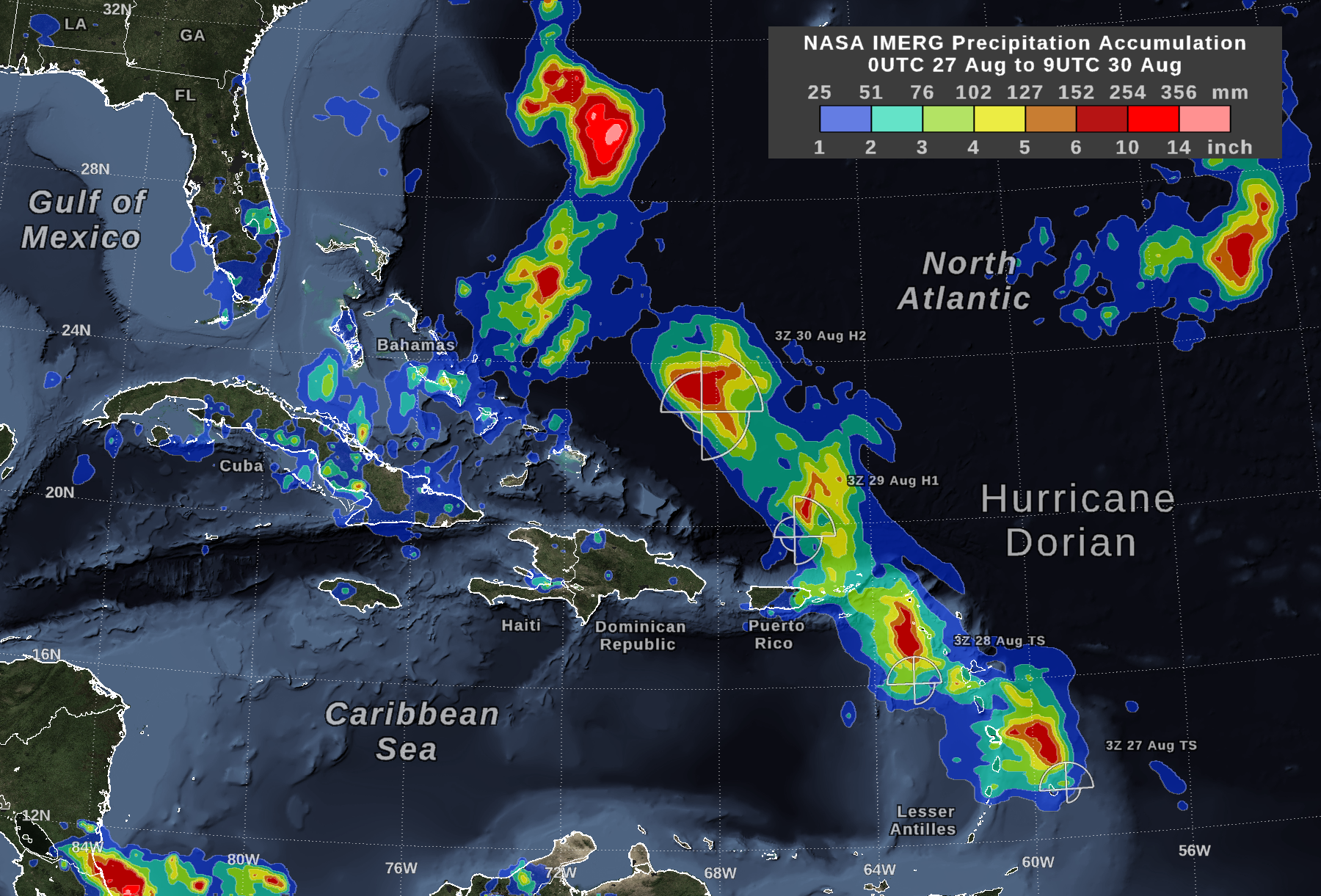 NASA will be tracking Hurricane Dorian throughout this Labor Day weekend. The agency will provide status updates on the storm as it nears Florida and NASA’s Kennedy Space Center on the state’s central east coast, as well as updated video and imagery.

Mild days—perfect for an outdoor picnic or a nice hike—are expected to drop about 14 percent by the end of the century, according to new research published in Climatic Change. Globally, we experience about 74 mild days annually (20 percent of the year), but thanks to climate change we may lose 10 mild days across the globe by 2100. That doesn’t seem like much, but the average masks large regional changes: in some places, the number of mild days may drop by more than 100.

The map at right shows the projected change in the annual number of mild days—temperatures between 64 and 86 degrees Fahrenheit (18 and 30 degrees C), less than a half inch of rain (1 mm), and low humidity—by the end of the century. Compared to the 1986-2005 average, the orange-brown regions are projected to experience fewer mild days by 2100, whereas the purple areas are expected to see an increase in mild days per year. The white regions will be unchanged. The deeper the color, the bigger the change the region can expect.

Due to rising heat and humidity from climate change, large areas of Africa, Asia, and Latin America could see their mild days fall anywhere from 15 to more than 50 days per year by 2100. Of all the cities the scientists looked at, Lima, Peru—situated directly West of the Andes Mountains—was projected to have the highest loss. The South American city could see 114 fewer mild days by end of century.

Meanwhile, higher latitudes of North America, Europe, and Asia may gain up to 15 days of mild weather per year. On all continents, there are examples of mountains and forests providing a counterpoint to projected regional losses in pleasant weather.

The scientists also projected shifts in when the mild days will happen during the year. For many locations, summers will lose mild weather days and winters will gain them. That loss could pose a big challenge to public health; periods of mild weather can provide communities with a crucial break during heatwaves.

Editor’s note:  In order to make all land areas easy to see, this map is shown as a plain rectangle (cylindrical equidistant projection to geographers). This format causes areas at middle and higher latitudes to look larger than they are in real life.

Chicago is at the center of one of the most populous metropolitan areas in the United States: around 10 million residents live in the region, in neighborhoods that range from high-density housing to suburbs with yards and open space between single-family homes. Trees in yards and parks across the region provide some shade when temperatures rise, but the region’s tree canopy—the percentage of the ground covered by tree branches and leaves—is lower than in many other cities in the Midwest.

The loss of 13 million ash trees to an invasive insect, the emerald ash borer, has further reduced the canopy in many areas. The cost of removing and replacing ash trees has exhausted many municipal budgets in the region, leaving little money to care for the remaining trees or time to plan ahead.

Trees around the elevated train in Chicago. Photo by Lindsay Darling, Morton Arboretum. Used with permission

The Chicago region is already experiencing temperature increases, more heavy rain events, and local flooding that can all place further stress on urban trees. These impacts are expected to become even more pronounced in the years to come. Faced with the decline of urban trees, concerned groups joined together to form the Chicago Region Trees Initiative. Their goals were to improve management skills and knowledge, increase the region’s tree canopy, and incorporate species that are resistant to pests and the impacts of climate change.

Resilient cities draw strength from their green spaces. Urban green space helps to cool cities during the summer, control storm water, and capture air pollutants. Green space can reduce stress and neighborhood crime, and it provides places for neighbors to forge strong connections. Healthy and empowered communities are better equipped to deal with change in a positive way.

Those benefits motivated the Chicago Region Trees Initiative to partner with Leslie Brandt, a climate change specialist with the Northern Institute of Applied Climate Science and the U.S. Forest Service, to confront the decline in urban trees. Their goal was to assess the vulnerability of the region’s trees to climate change and other factors, and then move on to consider strategies for adaptation.

The partners used habitat suitability modeling, projected changes in heat and hardiness zones, and an assessment of tree species’ adaptive capacity to assess the vulnerability of more than 150 tree species that are currently growing or recommended for planting in the region. The assessment showed that some of the least vulnerable trees in the region are non-native invasive species. Conversely, results indicated that many of the species native to the area are vulnerable to changing conditions.

Representatives from counties, municipalities, and park districts worked with experts in climate change adaptation in a series of workshops on urban forest vulnerability and adaptation. Using a structured process, they evaluated which impacts and adaptive-capacity factors had the largest effects on vulnerability. Finally, they implemented a five-step adaptation project to incorporate climate change considerations into real-world projects and planning efforts, which included planting resilient trees.

An urban forest for the future

Communities across the Chicago region are working to incorporate vulnerability information and adaptation strategies in their work. Looking to the future, the initiative is seeking grant funding they will use to create real-world demonstrations of adaptation that resulted from the workshops.

This article was originally published as part of the U.S. Climate Resilience Toolkit’s “Case Studies” section. As part of the toolkit, users can explore how to use environmental and natural resources to make their area more resilient
Original story credit: This story was adapted from “Lessons Learned from the Urban Forestry Climate Change Response Framework.”

The Northwest Passage across the Canadian Arctic opened once again in 2016 as sea ice reached its second lowest extent on record.